The first US Democratic debate kicked off on Wednesday with 10 candidates on stage. What did they say?

The first of back-to-back nights of debate took place on Wednesday with 10 of the 20 Democratic presidential candidates in the United States who qualified for the debate going head-to-head on a range of issues, including healthcare, immigration and US foreign policy towards Iran.

Aside from technical difficulties, Wednesday’s debate offered few major surprises, but some heated exchanges, as the candidates sought to appeal to voters by highlighting individual platforms and points of divergence.

How Biden could steer a divided US government

From healthcare to immigration, and the economy to Iran what did the candidates say as the lead up to the 2020 race heats up?

One of the issues showcasing differences among the 10 candidates on stage was healthcare.

Candidates battled over whether to abolish private insurance and shift to a Medicare for All system.

Warren and de Blasio were the only two candidates to raise their hands in support of eliminating private insurance.

Warren, a leader of the party’s progressive wing whose popularity ratings have risen, according to polls, said Americans were at the mercy of private insurance companies. She backed a government-sponsored Medicare for All approach and criticised those who said it wasn’t politically feasible.

“What they are really telling you is they just won’t fight for it. Healthcare is a basic right, and I will fight for it,” she said. 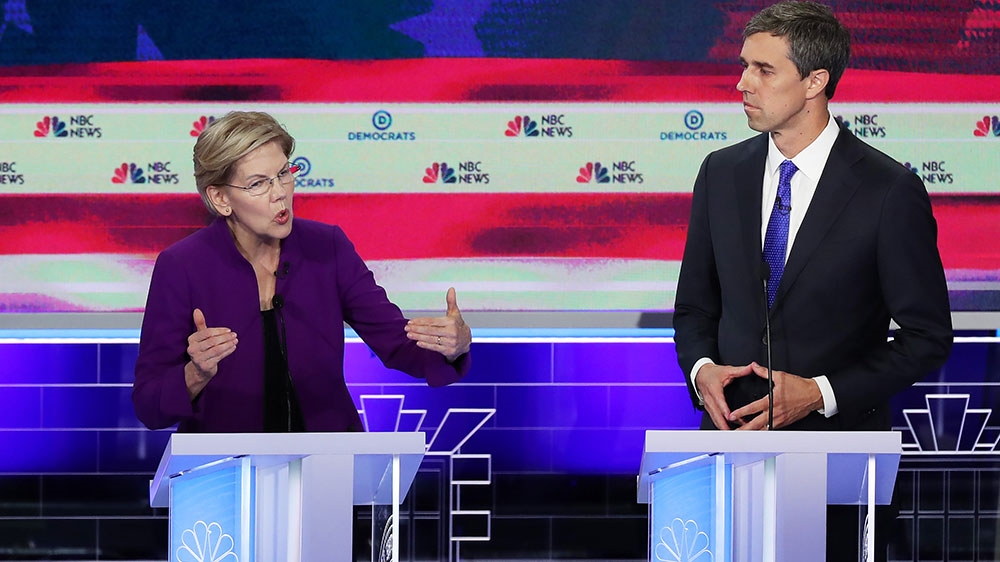 Most of Warren’s rivals on Wednesday night, including O’Rourke and Klobuchar called for universal healthcare but didn’t want to get rid of private insurance at the same time.

Delaney, an outspoken critic of Medicare for All who supports a universal healthcare approach that includes private insurance, said Democrats should not ditch a system that some Americans want.

“I think we should be the party that keeps what’s working and fixes what’s broken,” Delaney said.

De Blasio cast the debate as part of “the battle for the heart and soul of our party”.

O’Rourke said private insurance was “fundamental to our ability to get everybody cared for,” but de Blasio cut him off.

“Congressman O’Rourke, private insurance is not working for tens of millions of Americans when you talk about the copays, the deductibles the premiums – it’s not working. How can you defend a system that’s not working?”

Inslee said he was the only candidate on the stage that had passed a public healthcare option and a law protecting women’s right to reproductive health and health insurance.

That drew a sharp response from Klobuchar.

“There are three women up here who have fought pretty hard for a woman’s right to choose,” she said, directing her gaze at Warren and congresswoman Gabbard.

One of the more heated exchanges on Wednesday was on immigration.

O’Rourke said that in his role as a congressman he’d helped introduce a bill that would ensure that those who were seeking asylum and refuge in the US were not criminalised.

Castro countered: “I’m not talking about the ones that are seeking asylum, I’m talking about everybody else.” He accused O’Rourke of not doing his homework. 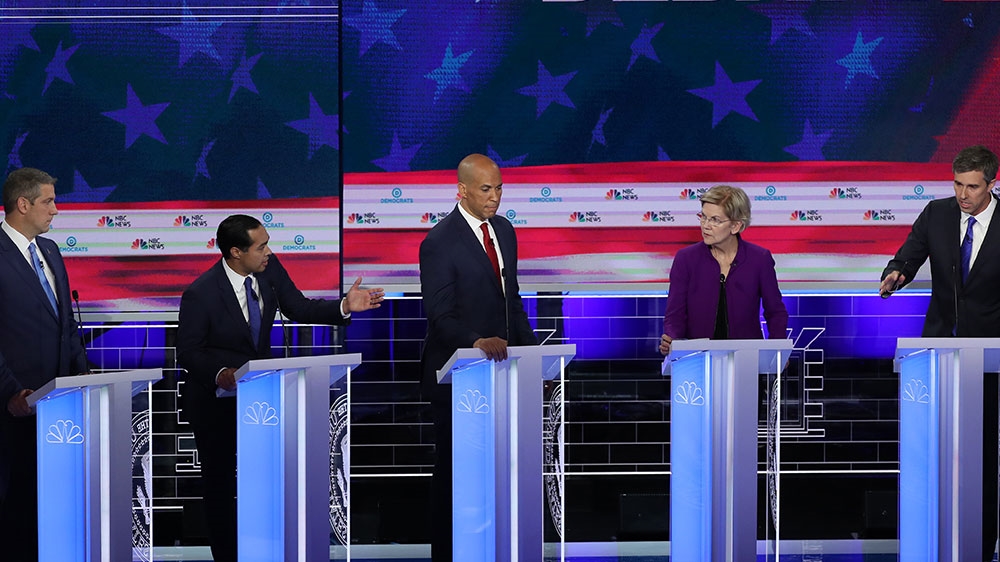 Candidates pointed to the recent deaths of Oscar Alberto Martinez Ramirez and his 23-month-old daughter, Valeria, who drowned while attempting to cross the Rio Grande River between the US and Mexico.

Several candidates blamed President Donald Trump and his immigration policies for their deaths. The family had grown frustrated over the long wait in Mexico to apply for asylum in the US.

“Watching that image of Oscar and his daughter Valeria was heartbreaking. It should also piss us all off,” Castro said.

De Blasio earned loud applause when he reminded citizens that immigrants were not their enemies.

“For all the American citizens who feel you are falling behind and the American dream is not working for you, the immigrants didn’t do that to you!” De Blasio said. “The big corporations did that to you.”

All 10 Democrats railed against a national economy shaped by a Republican administration they said existed only for the rich.

“Who’s this economy really working for? asked Warren, who received the first question.

“When you’ve got a government, when you have an economy that does great for those with money and is not doing great for everyone else, that is corruption, pure and simple,” the US senator and former Harvard law professor added. “We need to call it out.”

The Massachusetts senator said the economy was working well for “giant oil companies” and those who wanted to invest in private prisons, but not for those who were struggling or facing the effects of climate change.

O’Rourke said: “This economy has got to work for everyone” and that, right now, it isn’t.” He added that everyone needed to be included in an economy that was booming.

He added that the Trump administration had focused on helping the wealthy and large corporations over everyday Americans – echoing similar sentiments of the other Democrats on stage.

Booker was the only one of the 10 candidates on stage in Miami on Wednesday not to raise his hand when asked if he would sign onto the 2015 nuclear deal with Iran as originally negotiated. Under the agreement, Iran agreed to limit its enrichment of uranium and submit to UN inspections in exchange for the lifting of economic sanctions.

Pressed to explain his rationale, Booker said as president he would “do the best I can to secure this country”.

Trump pulled the US out of the accord in May 2018 and has imposed increasingly tough sanctions to pressure Iran into a better deal. Since then tensions between the two countries have intensified, especially in the last month.

Gabbard offered strong words against Trump’s foreign policy, saying the president’s “chickenhawk cabinet” has “led us to the brink of war in Iran”.

Greatest threats to the US?

The 2020 Democratic presidential hopefuls gave a range of answers on what they thought the greatest threat facing the US was.

China was mentioned by Klobuchar, Castro, Ryan and Delaney.

Climate change was mentioned by Warren, Booker and O’Rourke.

Inslee, who’s made climate change the lynchpin of his campaign, pointed instead to Trump.

And de Blasio said Russia because it was  “trying to undermine our democracy”.

Despite flying to Asia Wednesday for the G20 summit, Trump tuned in from Air Force One and did not miss the chance to knock his would-be opponents on Twitter.

Who’s up for night two?

Like the Joni Mitchell song puts it, “You don’t know what you’ve got ’til it’s gone.” For example, classroom education...