Tyson falls after report that US is investigating price-fixing allegations

Tyson falls after report that US is investigating price-fixing allegations

Shares of Tyson and two other chicken producers fell on Tuesday after news that the U.S. Department of Justice is looking into potential price-fixing accusations.

“We are aware of the Department of Justice’s request, which does not change our view that there is simply no merit to the allegations that Tyson Foods colluded with competitors. We remain committed to vigorously defending ourselves against these baseless allegations,” Tyson said in a statement to CNBC.

US antitrust chief should recuse himself from investigating Google and Apple

Jim Jordan Is Defiant as Allegations Mount, and Supporters Point to ‘Deep State’

Bribery allegations and links to North Korea: Why Latvia’s banking crisis matters for the rest of Europe 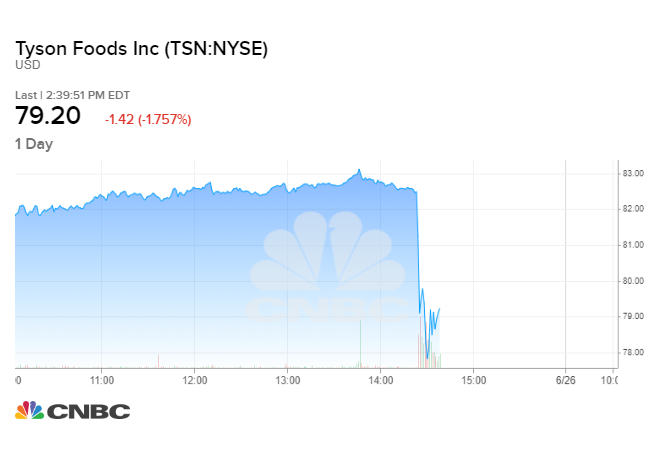 The DOJ intervened in a civil case against more than a dozen companies are being charged of conspiring “to fix, raise, maintain, and stabilize the price” of broiler chicken as far back as 2008, according to the complaint.

“Pilgrim’s strongly denies any allegations of anti-competitive conduct. The company welcomes the opportunity to defend itself against these claims through the legal process,” a spokesperson for Pilgrim’s Pride told CNBC.

”[Sanderon Farms] has not been subpoenaed in connection with the Department of Justice investigation,” Sanderson Farms said in a press release Tuesday. “The Company continues to believe the civil plaintiffs’ claims as to Sanderson Farms are wholly without merit, and we are committed to defending the case vigorously.”

What Is The Next U.S. Move With Iran?

The European Union announced a new plan on Wednesday to improve relations with the U.S. ahead of the inauguration...