The USS Michigan – armed to the teeth with Tomahawk cruise missiles – arrived in South Koreayesterday.

The sub is capable of blasting targets 1,400 miles away – meaning it could hit anywhere in North Korea right now.

South Korea – which lies in the shadow of Kim’s nuclear arsenal – has welcomed the arrival.

But the US ally’s defence minister called on Trump to show North Korea his power by sending more military assets to the region. 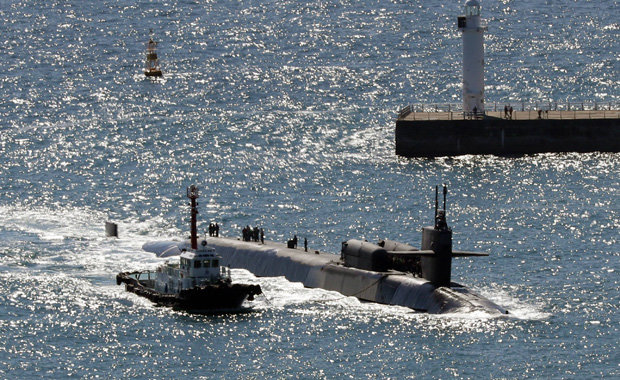 NUKE: The USS Michigan is armed with Tomahawk cruise missiles

A strike force of US warships is sailing towards North Korea today amid fears of war with the hermit kingdom.

Nuclear-powered aircraft carrier USS Ronald Reagan and its strike group are expected to arrive in the Korean Peninsula within the next 24 hours.

The huge warship is expected to be joined by four destroyers and two submarines for joint drills with South Korea.

The US held joint military exercises with Japan and South Korea in the Sea of Japan last week.

Six US planes – including a “nuclear sniffer” and two Air Force B-1B Lancer bombers – took part in the military exercise on Tuesday night.

But South Korea has called for more weapons to keep the warmongering dictator at bay.

On a visit to the Ohio-class USS Michigan, South Korean Defence Minister Song Young-moo said: “Now is the very time to show the power of close South Korea-US coordination under the circumstances that North Korea’s threats go on.

“The strengthening of the regular rotational deployment of US strategic assets demonstrate the allies’ strong commitment to the defence of the Korean Peninsula.”

Kim Jong-un – as well as his powerful Communist allies in China – hate US forces’ deployment in South Korea.

More than 25,000 US troops are permanently stationed there and Kim fears they are preparing for an invasion.

Mom kills 2 sons, herself. But why did she do it?

The European Union announced a new plan on Wednesday to improve relations with the U.S. ahead of the inauguration...