A letter to Kurdish soldiers from a US military wife

About 200 people gathered Saturday in Moore County to pay their final respects to Shanann Watts and her two young daughters, all of whom will be buried in North Carolina after they were murdered last month in Colorado, allegedly by her husband and the father of the girls.

Chris Watts is facing several charges in Colorado, including three counts of first-degree murder, two counts of killing a child under 12, one count of unlawful termination of a pregnancy and three counts of tampering with a deceased body.

The case has shocked and saddened people who knew Shanann Watts, a North Carolina native with family and friends who still live in Moore County.

After the funeral, which was held at the Sacred Heart Roman Catholic Church, people were visibly upset as the coffins were placed into the back of the hearse.

“Dear Shan, I have so much to say, but I will make it short. Daddy loves you,” the message said. “You are a wonderful daughter and great mother. You will always be daddy’s little girl. Till we meet again, I love you with all my heart.”

To Bella and Celest, Rzucek wrote “Bella, you will always be my silver bells. Celeste, Pop Pop will take care of your truck. Throwing kisses and hugs to all of you.” 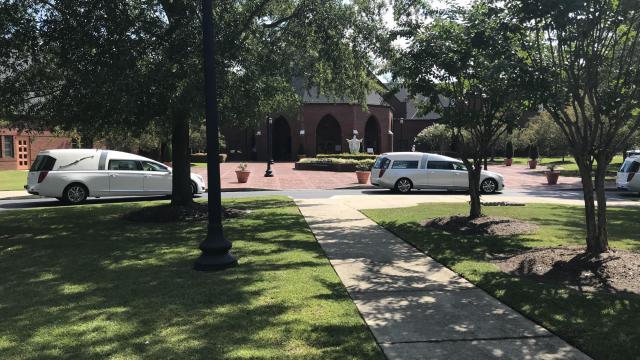 Rzucek and his son, Frank Rzucek Jr., were among the 10 pall bearers during the funeral.

Inside the church, privacy was sacred after the family’s agony had become so public. Mourners declined interviews with WRAL News, but Barbara Lattanze, who attend the church, had something to say.

“I’ve shed some tears and I felt like I needed to be here for the family,” Lattanze said.

Lattanze didn’t know Shanann Watts or her daughters, but new the story of their deaths.

Police first visited the Watts home in Frederick, Colorado, on Aug. 13, after a friend asked officers to check on Shanann. Police searched the house and found the woman’s cellphone stuffed inside a couch. Her purse was in the kitchen, and a suitcase was at the bottom of the stairs.

A detective spoke to Watts and learned about his plan to leave his wife. He told officers the conversation with Shanann was civil at first but that later “they were both upset and crying” and she planned to go to a friend’s house, court papers said.

When she and the girls did not return home Aug. 14, investigators ramped up their efforts, with help from the FBI and Colorado Bureau of Investigation. Christopher Watts was interviewed by several local television stations, saying he missed his family.

Prosecutors in Colorado have 60 days after someone is arraigned to say if they will seek the death penalty. No date has been set for Watts’ arraignment. The District Attorney in Colorado whose office is prosecuting the case, Michael Rourke, has said previous that a decision on capital punishment has not yet been made.

Chris Watts was in court on Aug. 21 where court documents were unsealed that shed more light on the case, which has garnered national headlines.

The court documents showed that Watts told police that it was Shanann Watts who strangled the kids after he told her he wanted to separate.

Watts told police that when he saw the violence on a baby monitor, he flew into a rage and strangled his wife before he took the three bodies to a remote oil site north of Denver, buried Shanann in a shallow grave and dumped the girls’ bodies inside oil tanks.

Police have said they don’t believe Chris Watts’ version of the events.

During that court hearing in Colorado, Frank Rzucek Sr., sobbed as her brother, Frank Rzucek Jr., rubbed his father’s shoulders and glared unflinchingly at Watts. A deputy stood between the men and the defendant.

Angela Lang remembers the protests over the police shooting of a Black man in Wisconsin. This time, though, the...