Evacuations are underway as flooding is impacting areas across Oklahoma, Kansas, Arkansas, Missouri, Illinois and parts of Nebraska and Iowa.

Nine fatalities have been reported as a result of the flooding. One driver attempted to cross a flooded roadway in Perkins, Oklahoma, two other bodies were found in a submerged vehicle near the Mississippi River in Missouri as well as other deaths.

The U.S. Army Corps of Engineers is warning Arkansans about the possibility of historic flooding along the Arkansas River. Dardanelle, Arkansas, has been one of the more recent cities to face the floodwaters, the Arkansas River at this point reaching nearly 36 feet at 3 p.m. CDT on Saturday. Evacuations are also underway in Fort Smith, Arkansas. Gov. Asa Hutchinson declared a state of emergency on Friday.

India’s election spending surges past US to record high

Officials in Tulsa, Oklahoma are also urging some residents to prepare to evacuate and move to higher ground as the expected rain will threaten already stressed levees.

On Friday afternoon, water began flowed over the emergency spillway at Elk City Lake, reported in a tweet. Greenwood county authorities have called for the evacuation of residents who live below the Fall River Dam according to a local news source.

According to AccuWeather Meteorologist Kristina Pydynowski, there are rainfall estimates of over 8 inches in the last seven days across northeastern Oklahoma, southwestern Missouri and southeastern Kansas.

“So far this month, 10 inches of rain has soaked Tulsa, Oklahoma. The city averages nearly 6 inches for the entire month,” Pydynowski said.

A bird picks up a meal from the flooding Arkansas River on Friday, May 24, 2019.

The flooding occurring at Harry S. Truman Dam grew worse after the storm blew through on Wednesday, May 22, 2019.

The floodwaters in Leonard, Oklahoma have nearly reached the bottom of this speed limit sign on May 24, 2019.

Floodwaters have crept up to the homes of residents of Leonard, Oklahoma on May 24, 2019.

Residents in Leonard, Oklahoma found floodwaters at their doorsteps by May 24, 2019 after days of heavy rainfall and violent storms.

Floodwaters nearly reach the top of cars in Leonard, Oklahoma by May 24, 2019.

The River Spirit Casino in Oklahoma will be closed for several weeks until the floodwaters recede.

Looking out from the River Spirit Casino in Tulsa, Oklahoma, the flood waters have nearly overtaken the casino. Due to this, the casino will remain closed for a few weeks.

Oklahoma National Guard few over flooded areas of Oklahoma to get a bird&#39;s-eye view of the damage on May 22, 2019.

Flooding impacted not just Oklahoma but reached up into Kansas as well by May 24, 2019, threatening to flood roads.

On Wednesday, two barges became loose during flooding on the Arkansas River. The town of Webbers Falls called for its 600 residents to evacuate.

The current carrying the barges off, slamming them into the Webbers Falls Lock and Dam on Thursday. They caused “minimal” damage to the dam according to the U.S. Army Corps of Engineers, but the structure held sound.

Due to the flooding and rising river levels, Arkansas Gov. Asa Hutchinson ordered two Arkansas Guard high-water teams to go to western Arkansas on Saturday. Gov. Hutchinson said he will deploy more soldiers as needed and urges residents to heed warnings and evacuate if needed.

“The area of Fort Smith, Arkansas, has not had exceptional rainfall, yet the Arkansas River stage is already above major flooding and forecast to record crest,” AccuWeather Meteorologist James Andrews said. 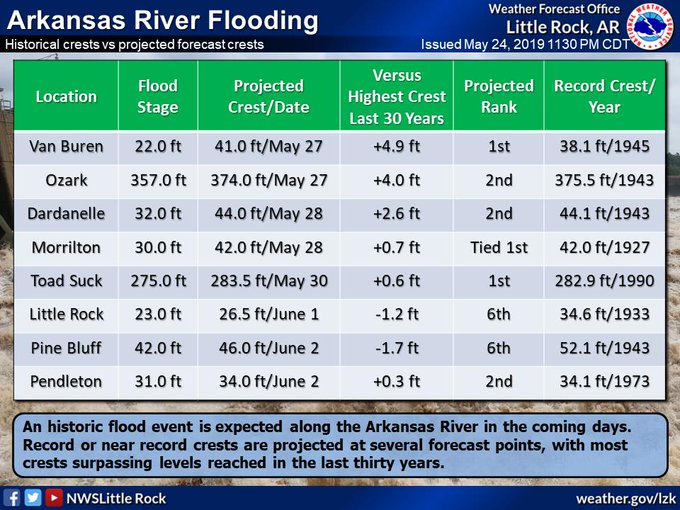 Some long time record crests could be surpassed as the Arkansas River rises. The projected crest of 41 feet at Van Buren is three feet above the record set in 1945. Levels at Dardanelle and Morrilton will be close to high marks reached in 1943 and 1927 respectively.#arwx

The excessive flow comes as water from flood control lakes in Oklahoma and Kansas is released into the Arkansas River.

“One can only guess what this Arkansas River flood crest would be like without the many flood-control dams and lakes upstream to hold back at least some runoff,” Andrews said.

RELATED:
How dangerous is it for untrained bystanders to perform water rescues?
Severe weather, flooding downpours to keep pounding the Plains this Memorial Day weekend
In case you missed it: Deadly tornadoes ravage central US; Runaway barges sink after crashing into dam

The Army Corps of Engineers continues to release 250,000 cubic feetof water per second from Keystone Dam into the Arkansas River and this level is expected to hold steady into Wednesday, May 29. Previously, the level was supposed to lessen on Sunday, May 26, but this changed Saturday morning as announced by Tulsa, Oklahoma Mayor G.T. Bynum.

Due to the additional release at Keystone Dam, flood water is steadily rising and residents and businesses along the Arkansas River need to heed all warnings and take precautions. 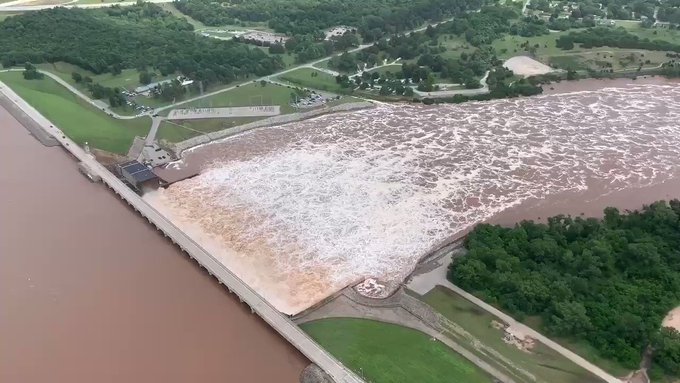 “Checking water levels behind upstream dams, in areas hit by heavy to exceptional rainfall, it seems that pools may be near or above design capacity [or] maxed out, so the dams are forced to pass high stream flows downstream to prevent catastrophe,” Andrews said.

All residents should stay out of the water, adhere to traffic diversions, and maintain a close watch on children. The Tulsa Police Department has already had to remove people from the areas along the Arkansas River.

Bynum reminded parents not to let their children run around or play in floodwaters, as it could put both them and first responders at risk.